I wanted to have temperature control for the fan so when I have high load it’ll spin faster to cool the PSU.
I found that the pot controls both the DC terminals and the fan header so it always on full speed (couldn’t find any reference for thermal management).

So I asked few people and a fellow ham came to the help. 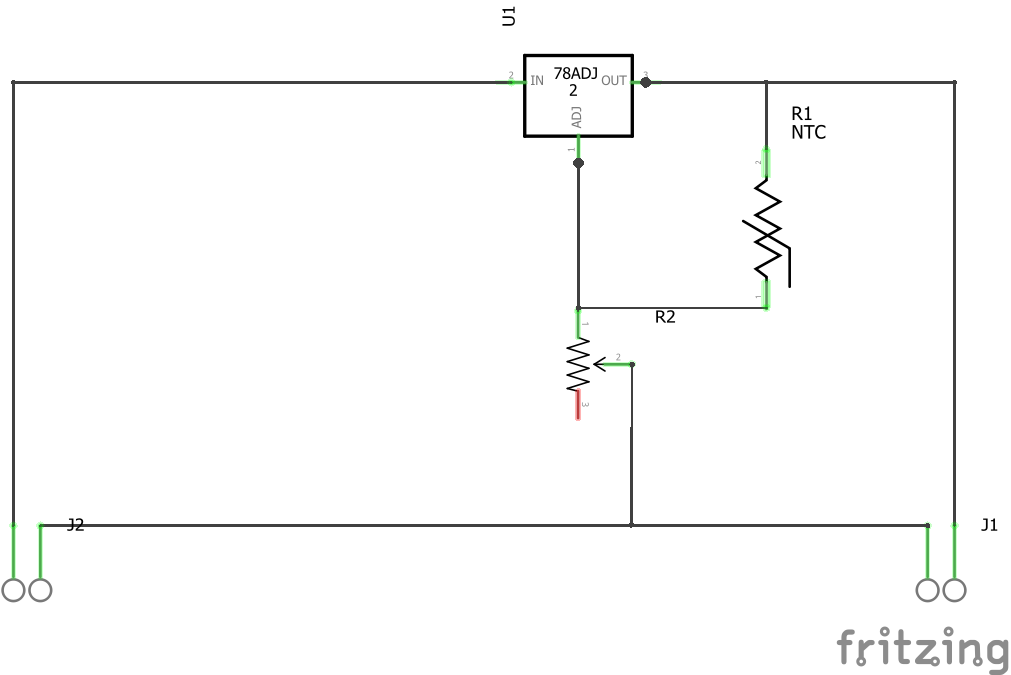 Sorry about my poor circuit drawing 🙂

The schematic is pretty easy on the left is the input (12V or more check the LM317T datasheet or more information) and on the right is the output to the fan.
I soldered everything on a copper PCB.

I tuned the pot to get the fan to spin more silently.
Attached the thermistor to the power transistors (with some CPU thermal paste cause that what I had).

I noticed the fan have voltage threshold and if I give 3V it can’t spin unless I give it a little push, that means I can’t make the fan go from 0 rpm to full speed because of the low voltage change.

After all of the tests I 3D printed small case to fit in and attached the wires permanently.

[notification type=”alert-warning” close=”false” ]Please note: the LM317T body is positive so don’t make it touch any metal part. I used some tape on the metal to prevent contact.[/notification]

I aligned the circuit so the fan will blow the air in the LM317 direction, which can get to 66°c on full speed.

I ordered IR Thermometer from eBay so I can measure the temperature on the power resistors and check what’s the status on high load.
Then I’ll check if the resistance of the Thermistor is getting low enough under load to get the full fan speed.

This website uses cookies to improve your experience while you navigate through the website. Out of these, the cookies that are categorized as necessary are stored on your browser as they are essential for the working of basic functionalities of the website. We also use third-party cookies that help us analyze and understand how you use this website. These cookies will be stored in your browser only with your consent. You also have the option to opt-out of these cookies. But opting out of some of these cookies may affect your browsing experience.
Necessary Always Enabled
Necessary cookies are absolutely essential for the website to function properly. These cookies ensure basic functionalities and security features of the website, anonymously.
Functional
Functional cookies help to perform certain functionalities like sharing the content of the website on social media platforms, collect feedbacks, and other third-party features.
Performance
Performance cookies are used to understand and analyze the key performance indexes of the website which helps in delivering a better user experience for the visitors.
Analytics
Analytical cookies are used to understand how visitors interact with the website. These cookies help provide information on metrics the number of visitors, bounce rate, traffic source, etc.
Advertisement
Advertisement cookies are used to provide visitors with relevant ads and marketing campaigns. These cookies track visitors across websites and collect information to provide customized ads.
Others
Other uncategorized cookies are those that are being analyzed and have not been classified into a category as yet.
SAVE & ACCEPT