In the last few months, I got into antennas a little bit deeper.
The pursuit of the best antenna for my location took me to interesting places.
My magnetic loop project is on hold right now, as it became too big and would attract attention when placed on the balcony.
I definitely need to finish the series and I will do it sooner or later.

Shortened vertical antennas have a coil to electrically fill the gap of shorting the radiating element.
The first thought was to copy the design of the MFJ antenna with some minor changes but then I decided to go on a different path and design it almost from scratch.
Using this calculator:
https://m0ukd.com/calculators/loaded-quarter-wave-antenna-inductance-calculator/
I got the inductance needed for the coil.
The frequency was meant to be 14 MHz but I decided to go with the lowest frequency that I want which is 7 MHz.
These are the parameters I’ve used:
Frequency: 7 MHz
Length of vertical or dipole element: 1.5M
Coil position (Distance from feedpoint): 0
Wire diameter: 1.5mm (electrical wire)
The result was around 40uH.

You may ask yourself, how do I know how to make the coil close to 40uH?
Good question!
You use another calculator.

This time I’ve used Coil32 calculator, which is awesome! (thanks to Valery Kustarev for making it)
You can download it here:
https://coil32.net/download-coil64-for-windows.html
Coil calculators can be found online but they don’t take into account the calculations for the spacing between the windings which is important when you design a coil with adjustable inductance.
When the spacing of the coil increases, the inductance decreases.

For this coil I decided to use 75mm PVC pipe to keep the coil short.
Taking a PVC pipe and wrapping wire around it isn’t easy, especially when the spacing between each turn needs to be maintained.
So I decided to 3D print stripes to hold the wire.
For this step I used Fusion360 and created a model of the PVC and 4 support stripes.
Using the coil function of the software I entered the parameters from the calculator (and added tolerances).

With a little knife I took off the insulation of the wire and started winding. 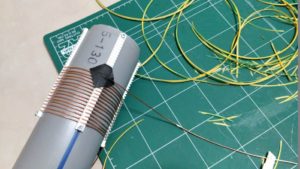 When finished I did some testings to see if I got the right inductance. 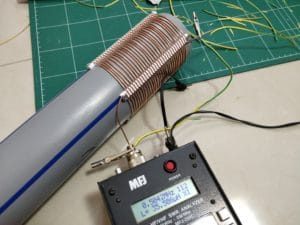 Unfortunately I couldn’t find any caps for 75mm PVC so I had to design and print by myself.

The top cap was a little bit weak so I got some plastic epoxy to reinforce it and then drilled the hole again.

For the bottom cap I designed a better and thicker version 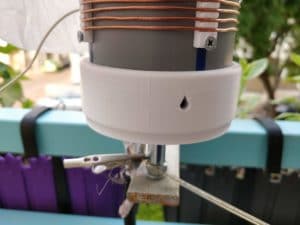 Both caps are held by pressure with a tight fit (although I made some holes to put screws in the bottom).
The bottom cap has a 20mm screw that connected to the mount (made out of metal by a friend, thank you Mark).

After few days in the sun, the top cap started to warp and the whip inclined more and more.
I used a metal can to give it a little bit more strength and pushed the cap inside.
An electrical tape was used to avoid contact between the can and the whip. 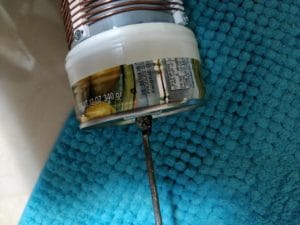 At first, I wanted to use a telescopic antenna like MFJ had but ordering it from eBay would take too much time.
Thus, 6mm threaded rods were chosen but none found on the hardware store so 8mm was the size to go.

I bought 2 x 8mm rods (length 1m each) with long threaded nut to connect them together.
In the end, it wasn’t stable enough so I used only 1 meter and it worked fine.

In order to reduce the weight on the cap, metal bar was cut off a fence and welded together with screw.
Got 2 pieces, 1m and 1.5m so far only used the 1m (thanks again Mark!). 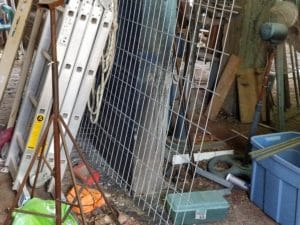 I could not resist testing it so the pictures were taken in the night, sorry about the quality.
Finding the spot for 20m band was easy.

The first test on the radio was awful, and I blame the conditions (and the fact that it was night time).
On the next day I got pretty good results.

Next test was done on 17m band and it was amazing.

Counterpoise length made of 6m of wire. 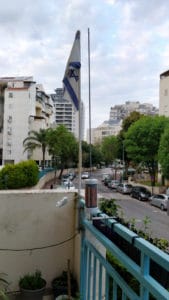 In order to eliminate RFI, I made 1:1 current mode choke as shown here:
https://www.youtube.com/watch?v=9kY2rz2jizs
Mine was made out of Fair-Rite 43 because that’s what I had in that moment. 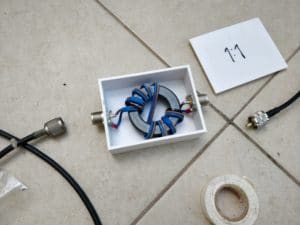 That solved most of the RFI issues but I couldn’t get good SWR with both the choke and counterpoise so I took the wire off.
Fair-Rite FT240-43 on eBay

That’s it.
This project was very interesting and I’m happy with the results so far.
73!

UPDATE:
I replaced the whip with telescopic antenna due to melting of the plastic cap (one hot day with 40 degrees celsius).
It weighs 65g and extends up to 1.2m (the seller declared 1.5m but it was misleading and he refunded me).
Works as well as the threaded rod.
Telescopic antenna on eBay 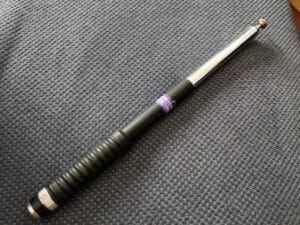